For a year and a half the City of New York tricked me into playing a game of cat and mouse with it.  I firmly decided that I was moving to Los Angeles after a trip here in May of 2007, and yet I didn’t actually move until November of 2008.  Why did it take 18 months, you ask?

Because NYC is crafty like that.  Just when I thought I was out, they’d pull me back in.  By “they” I mean the folks in Show Business.  ‘Oh I’ll just stay for one more play, it’s a really good part.’  ‘Oh just this one Student Film, I get to do an accent.’  And so on.  I kept getting fooled into thinking that there was a place for me in the Big Apple, only to be harshly reminded every month that that place required a hefty rent payment.

There’s no better example of this than what happened to me the day I sat down to book my one-way ticket to LAX for the First of November.  I had been staying for a few weeks at my dad’s place in Upstate NY, about three hours outside of the city.  I planned to take the Amtrak to NYC, go directly to the airport, and head for the West Coast.

Sure enough, six days after the date of the flight that I was literally about to click the “Complete Order” button on, my agent had gotten me an audition for Broadway.

Say it with me, Broadway.

Holy Monkeys.  Just five years earlier I had moved down to NYC with a clean pair of britches and a beat-up pair of tap shoes.  I didn’t actually know how to tap dance, but a deal at a yard sale is a deal, and Jesse Gavin doesn’t miss out on deals.  Broadway was my dream.  I say “was” because after years of auditioning for everyone I could and even getting a nice little nod from the New York Times, I was unable to even get a proper audition for Off-Broadway, let alone Broadway.  Einstein said “the definition of insanity is doing the same thing over and over and expecting different results.”  Since I’d come to the conclusion long before that I was clearly insane, it seemed as though Einstein was telling me that different results were in all likelihood not going happen, even though I was expecting them to.  I’d move to Los Angeles, where at the very least I’d have more insane people to relate to.  But then Broadway called…

I was not about to let NYC pull another one on me.  I booked a flight for the morning after the audition.  As I looked over my sides I realized that I had made the right choice in not holding my breath; I was auditioning for the part of a 15 year old.  Einstein comes to the day again!

It’s natural in life to make excuses for yourself.  The excuse “I didn’t get the part because it was for a fifteen year old and I’m clearly much older than fifteen” fell under the general umbrella of my overall excuse for never making it to Broadway: “I didn’t make it to Broadway, or even Off-Broadway, because I look kind of weird.”

I look kind of weird.  I’m cool with that.  Broadway doesn’t seem to be, but that’s fine.  I just figured there was no place for me on the big stage, so instead I moved to a place where physical appearance is not much of an issue, Hollywood.  New York just didn’t have a place for me is what I concluded…that’s all.  With this reasoning, I was able to make my peace with the Big Apple…and move on…

Well thank you, England, for destroying the only excuse I had for not being on Broadway.

When it comes to the world of Theatre, everything is trumped by England.  The typical Manhattan Theatre-Goer’s question “who’s in it?” can be answered simply, “I’m not sure, but it’s a transfer from London.”

Broadway has recently been taken by storm.  An English storm.  And this isn’t payback for the War of 1812, it’s like a figurative storm.  It’s…I don’t know if I’m explaining this correctly…it’s a really popular and successful play.  On Broadway.  And it stars this guy: 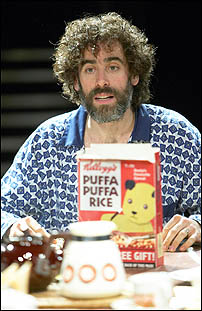 Which one is Jesse? The one that's not on Broadway, of course!

About fifty percent of the people I know from New York that have gotten in touch with me since I moved out here have done so to tell me about the guy that looks exactly like me in five to ten years.  Remember that thing I told you about New York City?  So here’s the thing: because of all the success of The Norman Conquests on Broadway, it will most likely be done at every regional theater in the country within the next three to five years.  This means they’ll be casting a part that was originated by a guy that looks exactly like me in a role that, from what I’ve been told, is perfect for me.  In other words, there will be so much opportunity for me in the world of Theatre back on the East Coast.

Stephen Mangan, I applaud your success as an actor.  This is no excuse, however, for playing a part in an evil and horribly tedious plot that the City of New York has concocted to get me to move back there.  Shame on you.

No, but really, why are you doing this to me?