When I was a senior in high school I worked at the Movie Theater in the local mall, and was lucky enough to not only have free movies, popcorn and soda, but also a half-priced discount at the pizza joint in the Food Court while on break.

But my eyes, they wandered.  Upon the opening of a new Taco place across the dining area, I couldn’t help but gaze amorously at a big sign draped above the counter.  It seemed to have some sort of deal written on it.  Surely this deal would be good enough to justify the occasional stray from my all-pizza diet.  Tacos are, after all, my favorite food.

Waddling across the dining area for a closer look, the pizza of countless shift breaks still loitering in my overtaxed stomach, I was met with the most infuriating exclamation mark I have ever encountered:

I opted not to say anything, assuming the mistake would quickly be corrected.  Despite the loss of money on the sign, it’d be worth taking it down and getting a new one to avoid the embarrassment.

Apparently not.  That bad boy stayed up for at least eight months.  I didn’t go back to the mall again for about two years and by that point the Taco joint had closed.  I wish I could say that this pricing error was just a silly mishap, but the harsh reality of it is that I see it all the time.  Unfortunately I never kept records of the blunders I’ve seen over the years, and many sleepless nights have followed as a result.

I woke up this morning from yet another tempestuous nightmare filled with the consequences of such shabby record keeping, only to realize that I had nothing to rant about for my Midweek Rant.  Terrified that Los Angeles and it’s Siren Song had wooed me into its signature 72-in-the-head-all-the-time-zombie-like-state, I racked my brain all morning to come up with something to be pissed about.

On a trip to Whole Foods to get pretty much the only thing I’ll allow myself to get there, Kale, I once again embarked on a futile quest to find a deal of some sort that could actually beat Trader Joe’s (why oh why does TJ’s not have Kale?).

Eco-Pacs!  Oh jeez, I thought, how I have missed these things from my days of shopping at The Westerly and Lifethyme Market in New York City!  The basic idea: put a little over two times the amount of cereal in a bag and sell it for a little more than the box.  It’s an Eco-Pac because it’s “Eco” friendly, as in the environment.  I always smiled warmly, though, at the thought that it was also “Eco” friendly, as in the economy.  And heck, the fact that it’s a “Pac” and not a “Pack” is a welcome allusion to my favorite video game growing up.

I sure do love wordplay!

But not when one of the meanings is shit all over.  I wish I could say that Whole Foods was disrespectful of the Pac-Man aspect of the Eco-Pac, as the beloved character could actually use a little antagonizing every now and then.  I’m not jealous or anything, it’s just that Pac-Man’s a little too loved, if you ask me.  The disrespect, however, was of the “Economy” aspect of the play on words that the boys down at the Nature Valley Think Tank had come up with. 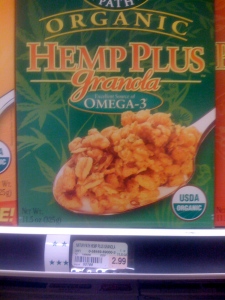 Not as ostensible a flub as the aforementioned Taco Joint, I concede.  This one is going to require Eighth Grade Level Math, up from the Second Grade Level required to know that the Sixth Crunchy Shell just ain’t worth it.

Now my one apprehension in calling out Whole Foods on this one is that perhaps this a Sale Price.  You’ll notice in the picture that there are a few stars next to the price.  These didn’t appear next to any of the other items on sale, all of which were clearly labeled with a big tag sticking out from the shelf.

Even if that was the case, it doesn’t sit well with me that they would discount the price of the one box of cereal that had a corresponding Eco-Pac, versus the other 5 varieties of granola and well over 150 types of cereal available that didn’t.  I can only imagine the secretive plotting going down in smoky back rooms at Whole Foods Headquarters.

“I don’t like the arrogance of this Eco-Pac…I say we put it in it’s place with a subtly marked sale price, making all the unsuspecting Green Minded shoppers suffer, whilst all the economically savvy consumers will recognize our underlying message: Screw the Environment.”

The agreeable murmur of the usual suspects is halted by a resonant voice from a dark corner:

A figure emerges into the hazy light only to remain disguised by an ominously tilted Fedora.  “And the fact that Pac-Man must pay.”

I love ya, Pac-Man, but they do have a point.

This specific instance should not be looked at as an appalling example of poor pricing, but rather a typical example of an across the board incompetence of people that price things…everywhere.  As much as I’d like to keep records and go on with my quest, I’m aware that it will no doubt land me in the loony bin.  Having successfully concocted a cop out for myself, I can’t help but wonder who, if anyone, will take action against these supermarkets?